The 50th Anniversary of Sabata

Today marks the 50th Anniversary of Sabata. The film premiered in Rome, Italy on September 16, 1969. Directed by Gianfranco Parolini as Frank Kramer the film created a series of Spaghetti Western films released between 1969 and 1971, it starred Lee Van Cleef in the first, Sabata, Yul Brynner in the second, "Adiós, Sabata", and Van Cleef returning for the third, "Return of Sabata". Even though the second in the series was not initially a Sabata character it contained many of the same crew members and actors and the Italian title was changed to "Adios Sabata" for the English language release of the film and therefore became a part of the trilogy. Additional films copied the character and used it in the titles to confuse audiences and capitalize on the success of the original series. Such titles as "Wanted Sabata" (1970) directed by Roberto Mauri and starring Brad Harris; "Arriva Sabata!" (1970) directed by Tulio Demicheli and starring Peter Lee Lawrence; "Dig Your Grave Friend... Sabata's Coming" (1971) directed by Juan Bosch and starring Raf Baldassarre and "Watch Out Gringo! Sabata Will Return" (1972) directed by Alfonso Balcázar and starring George Martin are now part of the bag of Sabata films and rip-offs.

Story: Sabata rides into the town of Dougherty. While enjoying a drink in the local saloon, a group of thieves are robbing the town bank, making off with a huge metal safe containing $100,000. Sabata heads off the thieves and retrieves the money and brings back a wagon load of corpses. Sabata then runs across and old acquaintance, Banjo, who is passing through town. Sabata meets two other characters in Daugherty that he takes a liking to: a comical fat guy named Carrincha and an acrobatic mute named Alleycat, they soon become his sidekicks. After returning the money Sabata is offered a reward, by naming his price. He asks for $5,000. What everyone in town doesn’t know is that the respected town officials, Stengel, and Judge O'Hara are behind the actual robbery and Sabata just ruined their plans for collecting the insurance to buy a large portion of land that will be set aside for a train line coming through. After finding out this information, Sabata, Carrincha and Alleycat work together to blackmail Stengel and his army to get the money back. Banjo on the other hand has his own priorities and he tries to steal the money from Sabata. It all ends with a showdown and the double-crosser getting his just deserts. 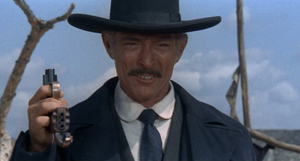