Who Are Those Guys? ~ Ken Clark 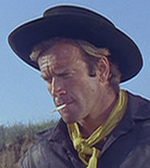 Kenneth Donovan Clark was born on June 4, 1927 in Neffs, Ohio. Ken was the youngest of three (and only son) of a farmer-strip coal miner. While attending high school in Bellaire, Ohio, he met Bette Blatt who later became his wife. At 17 Ken enlisted in the U.S. Navy and after he was honorably discharged, he returned to his hometown to work as a coal miner. Against his father's wishes, he decided to become an actor and moved to California. He worked as a construction worker to support his family and also as a model and appeared in several magazines and advertisements. A small, uncredited part on an episode of CLIMAX! caught 20th Century-Fox's attention. After drama coach Helena Sorell made a test of him, Clark was signed to a seven-year Fox contract. He then appeared in a string of popular films during the 50s and 60s, the biggest role being Stewpot in South Pacific (1958). At his point he and his wife Bette separated. In 1956, his busiest year, Clark appeared in five films, mostly westerns for Fox. However, by the late 1950s Fox dropped many of its contract players, including Clark. He then went into low-budget sci-fi films, such as “Attack of the Giant Leeches” (1959) and “12 to the Moon” (1960), while also appearing quite a bit on television, even shooting a television pilot called “Brock Callahan” but the series was not picked up for broadcast. In 1960, Clark decided to relocate to Italy and try his fortunes there. In doing so, he cut all ties with his family – his wife, three children, his sisters, and all other relatives; his wife finally divorced him in 1980. Clark found himself starring in Peplum, spy films and Spaghetti westerns with much more success than he ever saw in Hollywood. In 1965, he even starred in the first of a trilogy of James Bond-like films playing Dick Malloy (Agent 077). His three starring Euo-westerns were “The Road to Fort Alamo” (1964), “Savage Gringo” (1966) and “A Man Called Sledge” (1969). After the Spaghetti western craze ended and most Americans went back home to the U.S.A., Ken remained in Italy to act in films and television programs racking up 50+ appearances during his 40+ year career. Clark passed away from a heart attack in Rome on June 1, 2009, at the age of 81.