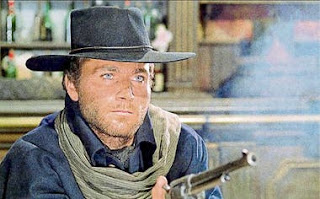 Beyond the Trilogy of The Man With No Name created by Sergio Leone, no film left such a deep mark on the history of the Spaghetti Western as Django (1966). Sergio Corbucci's best work forever configured the profile of the most imitated figure in the entire history of the genre (there are at least fifty titles with the same character). In the words of the world's largest expert in Spaghetti western, the English Sir Christopher Frayling, Django is the archetype of the "wandering ghost" who appears in so many adventures, silent and willing to fulfill his revenge time, in the most hostile environment can imagine. Incidentally, that first Django also built the identity of one of the great stars of the genre: Franco Nero. Avenger who appears in the memorable beginning of the film as a pilgrim (he does not have a horse) with a long cloak that goes through the rain without explanation a long path of mud and dragging an coffin.

We have much more present to the African-American Django who tries to free himself from his chains in the celebrated Quentin Tarantino film, which incidentally gives Nero a deserved cameo. But the original has blue eyes and a laconism that makes it even more mysterious. In the film we see him facing two simultaneous rivals: a group of racist renegades of the Confederate Army of the Civil War and a band of Mexicans with supposed "revolutionary" airs. From this scenario arises, as Frayling points out, a masterful tale of revenge and a sort of unrecognized remake of “For a Fistful of Dollars”, first film of the Leone Trilogy, of which Corbucci was friend and rival at the same time as the filmmaker recalls Alex Cox, Django fan and great scholar of the spaghetti western.
Posted by Tom B. at 6:41 AM