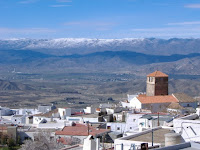 The small town of Turrillas is located eight hundred meters above sea level, about sixteen kilometers north-east of Tabernas, on the northern slope of the Sierra Alhamilla, some sequences from the film "The Savage Guns" (1962) were filmed, using the streets and the small square around the sixteenth-century church of Santa Maria, in the film - the northern side (the one towards the Sierra) can be eaily recognized. The interior of this Church is then used as a set for the part in "For a Few Dollars More" (1965) related to the Indio's lair (Gian Maria Volonte); while the tower of the fort of Los Alumbres in Rodalquilar (Verdi Torre-fuerte de Los Alumbres) is used to represent the exterior of the den itself. Given that at the time of the making of Sergio Leone's film the Church of Santa Maria di Turrillas was crumbling and the roof had partially collapsed, this situation is exploited, creating an evocative setting, also thanks to the use of a scenography in baroque colonial style. Because of the generosity of director Sergio Leone by paying the parish for the use of the church it has been reconstructed and the interior of this Church, has a very different appearance. 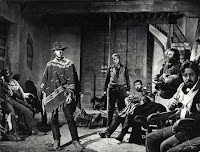