Who Are Those Guys? – Michael Bonnay 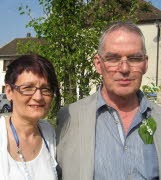 Michel de Bonnay was born in 1930 in France. Primarily and actor from 1942 to 1960 he appeared in ten films. He was also a production manager and assistant director. His only Euro-western was in Fernand Cowboy with Fernand Raynaud using the alias Michel Bonnay. Bonnay died in Eaubonne, Val-d'Oise, France on November 3, 2013.