Gold Seekers of Arkansas a TV vs DVD comparison


GOLD SEEKERS OF ARKANSAS
Aka MASSACRE AT MARBLE CITY
(1965) 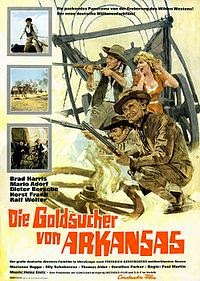 A good old West story about gold being discovered on Indian lands and the greedy settlers who want it. Throw in card shark Mario Adorf and his gang, a crooked Reverend, and you have everyone chasing everyone else’s gold.  Along comes Brad Harris as a government agent who succeeds in saving at least some of the cast and righting a few of the wrongs.

There is a huge wagon train, (Watch the scene in the trailer where you see the wagon train in the background. You can see a few of the wagons are cardboard cut-outs).  If you look past the obvious stereo types and just watch the story you will enjoy a very good action movie with lots of extras and boisterous action sequences.

Especially if you watch the new German version on a big screen.

I compared the old TV English version (1H 26M), (flat screen), with the new German language version (1H 38 M), with English subs, LBX and fantastic colour.
The new German version is much longer but there are several scenes in wagon train camps that were taken out and clips here and there to shorten it.  The action scenes are clipped because in the longer version the Indians ride and ride and keep on riding for what seems like forever.  That was all clipped.
What I do is watch the good colour version on a big screen and listen to the English version on another TV pausing here and there until they match up.  You will need both copies to truly enjoy the film. 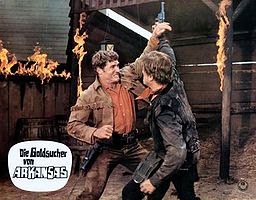 One shot shows a burning timber falling on Mario Adorf during the final battle.  I wonder if that was an accident or intentional?