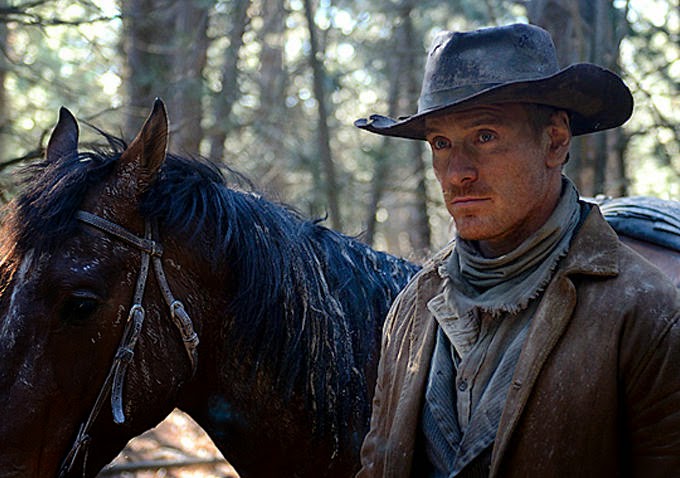 Even those that lived in the more unforgiving 19th century were apparently hopeless romantics. In writer/director John Maclean’s evocative fairy tale Western-adventure starring Michael Fassbender and Kodi Smit-McPhee, the heart leads and the head follows further behind. And in the trail of dead that mark the hard journey to reunion, unlikely families form.

In the cruel and merciless landscapes of the Western frontier, a young man has traveled great distances for love. Jay Cavendish (Smit-McPhee) has made a grand pilgrimage from Scotland across America in pursuit of his lost love, Rose Ross (Caren Pistorius). Having fled the country to America with her father, John (Rory McCann, the Hound from “Game Of Thrones”), the two are wanted for a tragedy that’s more accident than crime.

Life is cheap in this remorseless setting and it’s a miracle that Cavendish has gotten as far as Colorado without being killed. It’s with fortuitous timing that he crosses paths with Silas (Fassbender), a mysterious and monosyllabic brute who offers to chaperone him across the frontier safely in exchange for money. Initially at odds, the young boy repelled by the man’s killer nature, Silas proves to be a providential guardian angel, but he also has his own suspicious motivations that will come into question later down the road.

Hot on their trail is Payne (Ben Mendelsohn) and his band of cold-blooded bounty hunters. They might be seeking what Silas is after, but as an ex-member of their gang who has grown fond of Cavendish’s spirit and moxie, the outlaw-turned-protector's conscience may outweigh his desire for money and survival at all costs. A face-off is inexorable and the way that Maclean’s script intertwines these three different groups is fantastic stuff.

Brilliantly executed, Maclean’s movie is certainly an unconventional Western with a European and outsider’s perspective. While it has its share of traditionally moody and atmospheric elements, “Slow West,” is perhaps best defined by its sharp wit, absurdist violence and fairy tale qualities. Evincing a magic realism of fable dreaminess, juxtaposed with harsh severity, Maclean is right at home with this tone. Hilarious outbursts of violence — thrilling whip pans and smash cuts — are reminiscent of Quentin Tarantino and the Coen Brothers, but his sensibilities and wicked sense of humor still feel fresh.

And for all its heightened and artificial elements underneath its layers, there’s a sad soulfulness inside; the picture quietly commenting on the death of the native Indian, the dark, inhumane impulses of man and the blood-stained hands that built these lands. Perhaps the most enriching idea in the film is not the killer in search of salvation, or the comic/tragic notion of adoration that won’t be reciprocated no matter how many miles one logs, but the concept of ever-evolving families as orphans, strays and drifters collect together around the fringes of the Wild West.

Silas wants nothing to do with his former band of scoundrels, but they’d do anything to have him back. And as ruthless as these killers are, their complexity is demonstrated when they adopt two children along the trail. Likewise, Silas and Cavendish make for their own father/son duo and yet another abridged clan awaits them at their final destination.

The cast is solid all around. Fassbender is mostly taciturn, but always has an imposing presence and a cut-through-you gaze. Smit-McPhee is solid as the guileless innocent and Mendelsohn’s father-figure devil… well, his spirit elevates any picture from just showing up. Newcomer Caren Pistorius, in particular, makes the most of limited screen time. She doesn’t even have much dialogue in the film, but she cuts a striking impression in all of her scenes. 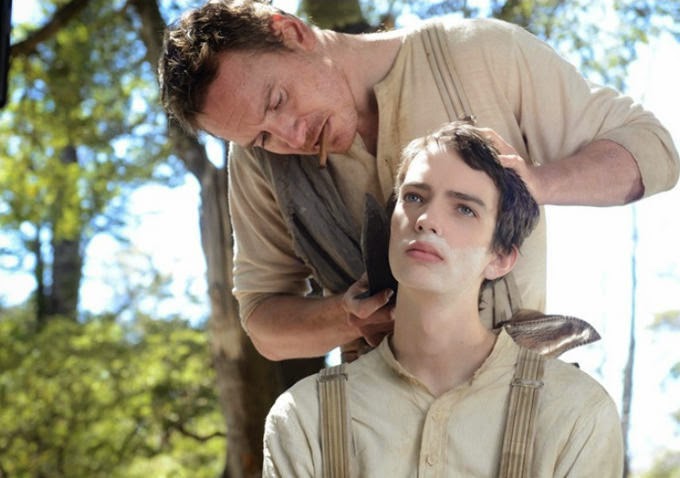 Jed Kurzel’s score is memorable, a bit more playful than the average, often overly-lugubrious Western. Shot in New Zealand, rather than the United States, it might be a bit obvious, but it feels like you can turn a camera in any direction and soak in some of the most gorgeous panoramic vistas you’ll ever see. Still, DP Robbie Ryan shoots the hell out of every scene.

Slow-burning and simmering, “Slow West” knows how to kick the voltage into high gear. As the movie gallops to its inevitable epic conclusion, the narrative is like three wicks lit and racing to a thrilling and explosive ending with a high body count, but with heart and soul, too. A dark, but spirited fable about the pitilessness of the West, the meaning of home on the range and the worthwhile qualities of wicked, seemingly irredeemable men, “Slow West” is a terrific little parable, and a strong debut by John Maclean worth treasuring.