ZORRO IN THE COURT OF ENGLAND 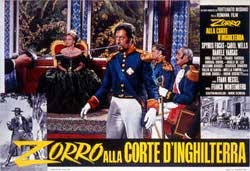 Sir Basil Rutherford, governor of the island of Hamilton, in Bermuda, tyrannizes his subjects, stripping them of their property and using the gallows with their every attempt at rebellion. Fighting against him is the elusive Zorro, whose identity is concealed under the disguise of a quiet young landowner, apparently whose undertaken not to challenge the authority of Sir Basil.  After a man is hanged, Zorro travels to England to Queen Victoria and reveals the truth about the situation on the island.  Lord Percy Moore, Crown counsel and guardian of his niece Patrizia - whose property has been secretly squandered for gambling and women - offers to leave for Hamilton, apparently to investigate the work of Sir Basil, but actually wants to exploit the situation and take advantage of the friendship that binds him (unfortunately the Queen does not know it) to the indicted governor.  Reaching the island, in the company of his nephew Patrick, Lord Moore agrees with Sir Basil to which he yields - in exchange for his promise to give up the dowry and the hand of Patrizia.  Since the arrival of Lord Percy has not changed anything in the previous situation. Zorro, who has also returned, has meanwhile fallen in love with Patrizia, resumes his fight against Sir Basil and his shady partner.  To break the resistance of his subjects he manages to forcefully hasten the marriage of Patrizia and Sir Basil, but Zorro arrives in time to prevent it, and while the governor is killed by his own betrayed lover. General Kingstone is sent by the Queen to stop the dishonest Lord Moore. Knighted, Zorro can finally devote himself to his beloved Patrizia.