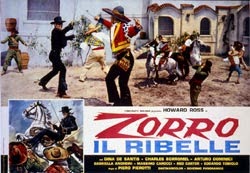 In a small town on the border between Mexico and Texas, the tyranny of the governor Alvarez is opposed by a group of rebels led by Salvador and a mysterious masked rider, Zorro. With the governor, however, are his son Louis, dissolute young, Don Ramiro, a cowardly and garrulous dandy and a bloodthirsty posse commanded by Cobra.  At a party given by the wealthy Don Miguel to solemnize the purpose of distributing the land to the peons, Alvarez intervenes and prevents any further action, declaring it "revolutionary," the gift of land and imprisons the noble lord requiring, among other things, he give his daughter Isabel Loiuis in marriage. The situation soon becomes untenable and while the rebels are organized and have their first clashes with soldiers of the Governor, Don Ramiro agrees to marry Isabel precipitously, to put the son of the governor with a fait accompli. This is going to cost the life of Don Miguel but the outbreak of the revolt led by Zorro and his friend Salvador, soon eliminates the tyrant and his accomplices.  Success leads Zorro to take off the mask and to reveal his identity to Isabel.