The new one runs faster so there are a lot of new scenes even though the run times are similar. All the “songs” and “dances” are sliced out of the German copy leaving only the actions scenes in the English version.

If you have both sound levels on you will notice they used different music in each.

The town is attacked by Indians so everyone runs to the Army Fort for protection.  It seems that the local land baron is stirring up trouble so he can buy-up all the area, as oil has recently been discovered.  Everyone is conspiring to take everyone else’s land.  Cliff McPherson (Brad Harris), has been sent on a secret government mission to sort out the mess.

There is a huge battle at the end where the soldiers and the wagon train are ambushed in a valley after the weak commander gets tricked into leaving the safety of the fort.

Once you side-step the obvious stereo types you can enjoy a good old fashioned wild west movie.

Under Tony Kendall’s leadership the Indians are the only ones who come out honorably in the story.

One cute scene has Brad taking a bath in a curtained room next to Olinka Berova. 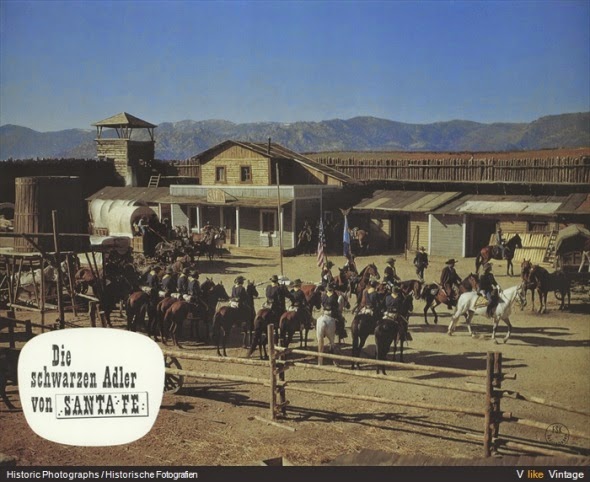 They built a fantastic full sized wooden stockade where most of the story unfolds.

This movie marks the start of a long relationship between Tony Kendall and Brad Harris.