We continue our search for locations for “A Few Dollars for Django”. Sheriff Regan brings in the bodies of the Bransbury’s dead henchmen and the captured wanted outlaws Sam Lister and Buck Dago. Lister and Dago are locked up but proclaim their innocence as being caught in the middle of the gunfight and hiding behind the rocks for safety. Regan tells them even if that is true they are still wanted for the bank robbery they pulled off with Jim Norton. They tell Regan is dead and they are innocent. The sheriff sets his trap and tells them that the rumor is Jim Norton is still alive. This only strengthens their suspicion that Trevor Norton is really Jim Norton.

Building ruins and the fence on the border of the Spanish helicopter military FAMET base are all that remains to show the town site used in “A Few Dollars for Django” in Colmenar Viejo. 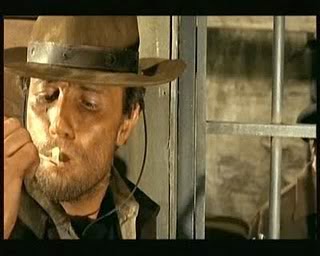