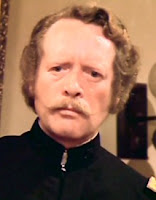 Patrick Joseph McGoohan was born on March 19, 1928 in Astoria, Queens, New York. Patrick was brought up in Ireland and Britain, where he established an extensive stage and film career, with his most notable roles in the 1960s television series ‘Danger Man’ (renamed ‘Secret Agent’ when exported to the US), and ‘The Prisoner’, which he co-created. McGoohan wrote and directed several episodes of ‘The Prisoner’ himself, occasionally using the pseudonyms Joseph Serf and Paddy Fitz. Later in his career he moved back to America and subsequently appeared as the killer in four Columbo episodes, twice winning an Emmy. He was featured in David Cronenberg's “Scanners” (1981), and played King Edward I, "Longshanks", in Mel Gibson's “Braveheart” (1995). McGoohan appeared in one Euro-western “The Genius” (1975) as Major Cabot Harris starring Terence Hill. McGoohan is the father of actresses Catherine McGoohan [1952- ] and Anne McGoohan [1975- ]. He died on January 13, 2009 at St. John’s Medical Center in Santa Monica, California. Today we remember Patrick McGoohan on what would have been his 85th birthday.