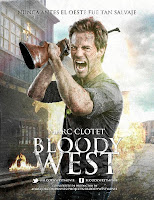 The son of Concha Velasco and Paco Marsó films a western horror title that will, among others star, Michelle Jenner, Raúl Arévalo and Marc Clotet.

A group of friends are traveling to the Almeria desert to spread the ashes of the father of one, a lover of spaghetti westerns. However, when they get to one of the villages west of Tabernas they do not find the usual spectacle of town people but some sinister characters who believe they are still living at the time of the Spaghetti western. And their attitude to 'outsiders' is not exactly fond. This is the starting point of 'Bloody West' the debut of director Manuel Velasco (Madrid, 1976), son of actress Concha Velasco and producer Paco Marsó Macael.

"It is a film that comes from a group of friends, fans of terror and western that was made in Almeria in the sixties and seventies. Victor Hugo Matellano and Stuven Casasnovas, the writers, wanted to write a horror film to elapse in an unusual environment.” Velasco said.

Filming is scheduled for this summer and will take place entirely in Tabernas, "between deserts, mountains, hills, and one of the villages of the West". Thus, Almería is on the big screen, something not very common any more. "They say explicitly that go there, to leave the ashes on a hill where Clint Eastwood was in 'A Fistful of Dollars'. We are very serioues moviegoers, we love the brand 'Almeria, land of cinema', a place where they have made films by David Lean to Steven Spielberg ".

The project also has a strong sentimental meaning for the young filmmaker, closely linked to the land of his father. "He started as an actor. He was gorgeous, spoke no English and was always a follower or hero of the Mexican Revolution to justify his heavy accent. The director has to engage in an emotional way with the project, and Almeria is also a land that I love. I vacationed there and remember the wonderful films “Lawrence of Arabia”, “Indiana Jones and the Last Crusade” ... It is a land that is pure cinema."

'Bloody West' is part of the new young Spanish 'star sytem'. "We have confirmed Leticia Dolera, Michelle Jenner, Raúl Arévalo, Marc Clotet, Carlos Bardem and Miguel Angel Munoz, and there are a couple of more very powerful names, but I can still move forward." Javier Botet (now filming in the province's short film 'Solstice' by Juan Francisco Viruega) and Eva Almaya of Almeria have also joined the cast. Who will star? "In Horror films you usually do not know who is going to die," Manuel says.

A fan of Spielberg and Hitchcock, Manuel Velasco acknowledges the influences of 'slasher' films of the seventies and eighties - 'Texas Chainsaw Massacre' and 'Friday the 13th' and their 'remakes'-in a debut and there will also be space for "humor and heroes".