La Calahorra, a stop along the railroad tracks for Spanish western films

When one recalls the westerns that were filmed in Spain, called spaghetti westerns, most people think of Almería. But there is a corner of Granada which also appears in this chapter in the history of cinema. This is La Calahorra, specifically the railroad station La Calahorra

It is halfway between La Calahorra and Charches, taking the off ramp at signposted at kilometer 312 of the A-92 (Granada-Almería highway). It is an eerie stop on the rail line from Almería. It is probably why Sergio Leone and others considered it a perfect setting for their films.
Half a century ago there was a flurry of activity there. It was here they ran, up and down, the electrical, decorators, the actors and actresses, the script girls, the still photographers, the cinematographer, assistant director and, of course, the director. Leone used this railway station in almost every one of his films.

You can remember certain scenes ... as at the beginning of “Once Upon a Time in the West”, Jill (Claudia Cardinale) arriving by train at Flagstone, or Tuco (Eli Wallach) boarding the train before his escape in the “Good, the Bad and the Ugly.”

These scenes were filmed at the station of La Calahorra, in the mountains of Sierra Nevada and the Sierra de Baza in the background, framing the action.

For the film buff and the curious there still stands not only the modest station but some of the sets for “Once Upon a Time in the West” such faded  signs as Phoenix, Dr. Merchant, dentist can still be seen on the buildings walls. 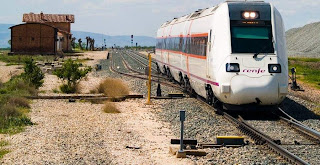