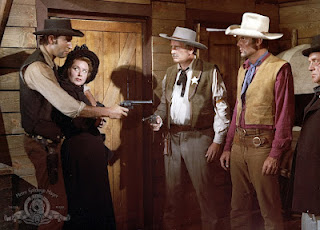 Sam Garrett, a Texas Ranger, tries to prove the innocence of Rex, a man on whose head hangs a reward of five hundred dollars. Trying to get the reward for his capture are four thugs that behind their "respectability" is hidden their shady businesses and they are riding in league with the deputy sheriff. They take revenge on Sam by seizing the money of a wealthy farmer they kill the put the blame on the ranger, who is arrested. Sam escapes from prison and is pursued by four thugs because there is now a reward of two thousand dollars offered by the widow of the rancher. After ups and downs three of the bounty killers are killed and the fourth is captured by Sam. After the legal process it ends with his sentence to be hanged. But the ranger, helped by a young friend, is now able to discover the whole truth about the guilt of the surviving bounty hunter and to prove his case he causes the sheriff to stage a mock hanging. Believing he is now safe, the bounty killer gives up all he knows and confesses Rex’s innocence and the deputy sheriff is exposed.