Most of my film work was done in Italy where I usually played German or Austrian officers and noblemen. 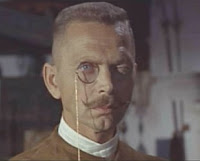