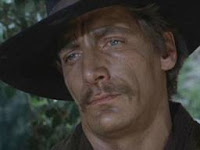 Romano Puppo was born on March 25, 1933 in Trieste, Friuli-Venezia, Giulia, Italy. Puppo worked in the Italian cinema for almost 30 years, appearing in over 100 films both as a stuntman and actor, ranging from Spaghetti westerns to crime and Italian comedy. As a stuntman, he was the stunt double for Lee Van Cleef, of which he was also a good friend. “For a Few Dollars More” (1965) and “The Good, the Bad and the Ugly” (1966), films shot by the "mythical" Sergio Leone, were films in which Puppo had the role of stuntman. Puppo appeared in over 20 Euro-westerns. He was also a friend of actors Fabio Testi and Giuliano Gemma. Romano died on May 11, 1994 following a heart attack, which occurred while the actor was driving his motor scooter Typhoon. The actor Giuliano Gemma, who was present at his funeral, gave the eulogy. Today we remember Romano Puppo on what would have been his 80th birthday.