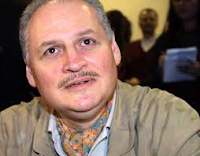 In the world of cinema you take the good with the bad and unfortunately one of the bad appeared in several Euro-westerns as a child actor. Giuseppe Valerio Fioravanti was born in Rovereto, Trentino, Italy on March 28, 1958. After a brief career as an actor he became interested in political activism in the Italian Social Movement, and in the mid-seventies, decided to embrace the armed struggle and founded the NAR (Nuclei Armati Rivoluzionari), an association which featured a season of violence which ended with his arrest that took place in Padua, February 5, 1981. Tried and found guilty of various offenses and the murder of 93 people, he was sentenced to a total eight life sentences, 134 years and eight months in prison. After 26 years behind bars he was released in April 2009, and is once again a free man. During that period of armed struggle he was nicknamed the Lieutenant.

Since 1985 he’s been married to the former terrorist Francesca Mambro, his partner since the 1970s and from which, in 2001, also has a daughter (Ariane). He is the older brother of former terrorist Christian Fioravanti.