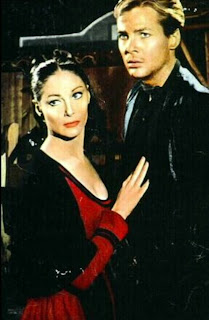 To avenge the death of his parents, who are stripped of their lands and killed by the Clark brothers, Hud learns to handle a gun with extraordinary skill with the teachings of a famous gunslinger, Carranza. He then goes back to the Stoneyville where, despite the warnings of his friend, Steve the sheriff, and the prayers of his sister, Betty, is determined to take his revenge. Ably Hud terrorizes the three Clark brothers without revealing his identity and intentions, and actually, hired by them for a thousand dollars a day, as a body guard against the mysterious assassin. He separately kills two of the murderers, and the third, Jason, he prefers to be arrested by Steve after confessing his crimes. Under the protection of the sheriff and relentlessly dogged by Hud, Jason is taken to a nearby town, tried but acquitted with the help of a dishonest lawyer. Steve and Hud are disappointed. Jason eventually show’s his hand and after a fierce shootout in which the sheriff  comes to the aid of Hud, he and three assassins paid by Jason are eliminated. The lands that were stolen by Clark are returned to the rightful owners and peace returns to the region. Steve and Betty ask Hud to remain with them. But he has to go, sadly, his reputation as a "gunslinger" now condemns him to loneliness.