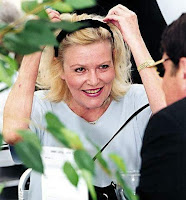 Olga Schoberová was born on March 15, 1943 in Prague, Protectorate of Bohemia and Moravia.
Olga graduated from Central School of Economics and began working as billing clerk in a Prague business. She was living with her older sister Eva, a model. One day Eva could not make it to an assignment so she sent Olga in her place. The shoot was very successful and a year later made her first film appearance as Winnifred in “Lemonade Joe”.  Olga became a Czech sex-symbol because she was the first beauty from Czechoslovakia to appear in Playboy, and made it to the front cover. She was also the first actress from her nation to know public acclaim in foreign countries, since Anny Ondra [1902-1987].  The Czech actress, was often compared with Brigitte Bardot and Ursula Andress during her acting career She acted in over 20 Czech, German, Italian and American movies. Olga was married to actor Brad Harris [1933-    ] from 1967-1969 and the couple had one daughter, Babrinka, called "Sabrina" who is also an actress. She then married producer John Calley [1929- ] (1972-1992).

In 1968 she appeared in “The Vengeance of She” under the name "Olinka Berova", and used that name for several more films. Olga appeared in four Euro-westerns: “Lemonade Joe” and “Black Eagle of Santa Fe”, “Massacre at Marble City” (all 1964) and “Count Bobby, Terror of the West” (1965).

Now permanently retired Olga spends her time between Prague and Los Angeles but does not entertain any thoughts of returning to films. Today we celebrate Olga Schoberová’s 70th birthday.