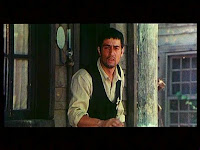 Giovanni Pulone was born on March 4, 1943 in Rome, Italy. Pulone has appeared in secondary roles  in over 80 films and TV appearances since 1967. He sometimes is credited as Bianni Pulone, Giancarlo Pulone and Giovanni Pulone. He also wrote the screenplay for the 1968 film “Scusi, lei conosce il sesso?” as Gianni Pulone he’s appeared in nine Euro-westerns from “Revenge for Revenge” (1968) to “The Return of Halleluja” (1972). Pulone usually appears as a henchman or gang member and his appearances were confined to those westerns filmed in Italy. Now retired Pulone’s last appearance was in the Italian film “Regina Coeli” (2000). Today we celebrate Gianni Pulone’s 70th birthday.