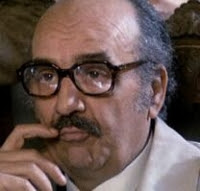 Andrea Aureli was born on March 5, 1923 in Terni, Umbria, Italy. After spending his childhood and obtaining a classical education in his hometown. He obtained a diploma in the Experimental Center of Cinematography in Rome in 1947. Aureli then began acting in films in the mid-1950sf. In the sixties he began appearing using the pseudonym Andrew Ray. Andrea participated in over 145 films and TV appearances, often playing the role of the villain and has worked with such directors as Mario Camerini, Nanni Loy, Lino Del Fra and Carlo Verdone. Among his many films were thirteen Euro-westerns including : “Bullets Don’t Argue” (1964), “El Rojo” (1966), “A Bullet for Sandoval” (1969), “Adios Sabata” (1970), “Shanghai Joe” (1973) and “California” (1977). Aureli retired in 1998 after his final appearance in the TV movie “La donna del treno”. Today we celebrate Andrea Aureli’s 90th birthday.