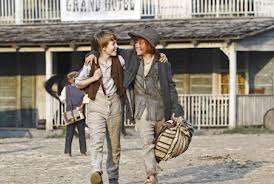 Huck Finn has been taken in by the widow Douglas and Miss Watson, after he had been found abandoned by his father and found by his friend Tom Sawyer and is now a wealthy boy. Also working at the Douglas house is the obedient slave Jim, who makes sure Huck goes to school and church regularly.


Huck’s greedy and violent father, who is drunk most of the time, would like to have Huck's money. When the boys notice that the widow has sold their friend Jim, the house slave to a dealer, they take Jim and with a homemade raft drift down the Mississippi in hopes of arriving in a state where slavery is prohibited. They are pursued by Huck’s father and three unscrupulous slave hunters. The three friends try to escape with great difficulty, and many adventures.