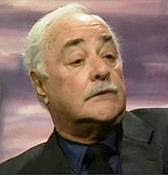 Michael Carreras was born on December 21, 1927 in London, England. He entered the British film industry as a teenager, and began directing low-budget action, adventure, and horror films in the late 1950s, including “Maniac” (1963) and “The Curse of the Mummy's Tomb” (1964), both for Hammer Films, which was founded and run by Sir James Carreras, his father. As a producer, Carreras' Hammer credits include the Terence Fisher horror films “The Mummy” (1959) and “The Two Faces of Dr. Jekyll” (aka “House of Fright”) (1960). He also produced such memorable Hammer chillers as Fisher's “The Curse of the Werewolf” (1961), Joseph Losey's “These are the Damned” (1963), and Tallulah Bankhead's final film, Silvio Narizzano's “Die! Die! My Darling!” (1965). Carreras was also the director of one of the first Euro-westerns filmed in Spain, “The Savage Guns” (1962) starring Richard Basehart, Alex Nicol and Fernando Rey. Michael died in London on April 19, 1994. Today we remember Michael Carreras on what would have been his 85th birthday.