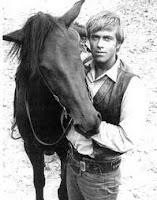 Aron Kincaid, an American actor who appeared in 1960s "beach" movies such as "The Girls on the Beach" and "The Ghost in the Invisible Bikini" and later had careers as a model and an artist, has died. He was 70. Kincaid, who lived in Beverly Hills, died of heart-related complications Thursday, January 6, 2010, at the Ronald Reagan UCLA Medical Center.

The tall and handsome Kincaid was a UCLA student when he was spotted in a Los Angeles stage production by a casting agent and signed to a contract with Universal. That led to a regular role in the final season of the sitcom "Bachelor Father" in 1962 — as Warren Dawson, the junior partner of John Forsythe's Hollywood attorney Bentley Gregg. Dawson becomes engaged to Gregg's niece, Kelly, played by Noreen Corcoran. Kincaid later appeared with Corcoran in the 1965 comedy "The Girls on the Beach" and had roles in "Beach Ball" and "Ski Party", and made what was billed as a "guest appearance" in "Dr. Goldfoot and the Bikini Machine" all in 1965 — as well as appearing in "The Happiest Millionaire” (1967), and the Euro-western "The Proud and the Damned" (1972) and other movies. Kincaid, who also made guest appearances on series such as “The Beverly Hillbillies and "Get Smart," moved to San Francisco in the early 1970s and launched a successful career as a model.

He also had a 20-year voice-over career in hundreds of commercials and did voice work on animated TV series such as "Smurfs," "Jonny Quest" and "The Transformers." He was born Norman Neale Williams II in Los Angeles on June 15, 1940. His father, a second lieutenant in the Army Air Forces, died during World War II. His mother remarried and moved to Oakland, where Kincaid graduated from high school. After graduating from UCLA in 1962, he enlisted in the Coast Guard Reserve. As an artist, Kincaid used the name N.N. Williams II. He sold his landscapes and seascapes through galleries in Laguna Beach. He had no immediate survivors.
Posted by Tom B. at 10:00 AM