The exhibition in Rome is hosted by the wife of the architect, set designer and costume designer.

The exhibition is at the Church of the Artists in the Piazza del Popolo in Rome, and is dedicated to the great architect, designer and Italian costume designer Carlo Simi. Creator of the extraordinary sets and costumes of the Spaghetti Westerns of Sergio Leone and Sergio Sollima, the founder of western Spanish Joaquin Romero Marchent, B-movies directed by Enzo G. Castellari, He also worked with Pupi Avati in 'Bix'e' The Way of the Angels' last film he worked on in 1999 before passing on the following year in Rome.

His costumes were used by Carlo Verdone in the hit comedy “Un sacco bello”, as well as those of the 'Magnificent Stranger’s' star performer Clint Eastwood in "A Fistful of Dollars", "For a Few Dollars More", and "The Good, the Bad and the Ugly". Simi’s signature sets and furnishings were used for the extraordinary “Once Upon a Time in America” and “Once Upon a Time in the West”. The exhibition, strongly supported by his wife Elizabeth Simi to celebrate the tenth anniversary of the death of her husband, it is home to many original sketches of sets and costumes from the "Once Upon a Time in America” to “The Good, the Bad and the Ugly”, “The Big Gundown” and “Face to Face", but also the plans for the houses he designed and built, the set designs first belonged to producer Alberto Grimaldi and then Sergio Leone then to PEA, Film Productions the same company that gave rise not only to the films of Leone, but also the unforgettable films of Bernardo Bertolucci, Pier Paolo Pasolini and Federico Fellini. The exhibition, which features some previously unseen photos of sets and designs shown in 3-D by Delta Star Pictures, which has provided for the occasion special 3-D glasses. The exhibit is a reminders to visitors that Simi was one of the reasons the films of Leone and others were so successful, is sponsored by the ASC, an Italian association of set and costume designers, Associazone Teatroi Carlo Terron, and The Sipario e del Consiglio regionale del Lazio. 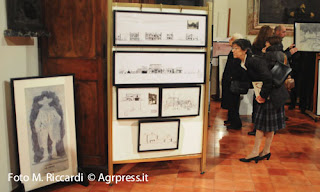