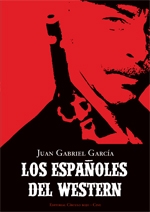 ‘Los españoles del Western’ delves into the exciting adventure films that marked the phenomenon of Europen westerns that are linked with the names of famous actors and directors like Sergio Leone, Clint Eastwood, Lee Van Cleef and musician Ennio Morricone.

The scenery of provinces such as Almeria, Madrid, Barcelona, Granada, Alicante, Navarra, Burgos, etc. became ideal for the stories inhabited by the characters in these films, also known as spaghetti westerns, which were filmed in the heyday of film making in Spain.

‘Los españoles del Western’, with a foreword by director Enzo G. Castellari, aims to celebrate the role of Spanish directors, actors, technicians and the Spanish landscapes that made the genre possible. Juan Gabriel Garcia achieves this in his book with a series of interviews with twenty men and women of the cinema, through lively passionate conversations, they open their hearts and minds to remember their film work and many other aspects of their experiences in the cinema.

This is a tribute to all those who made us see and dream about a Wild West that was not very far from our own homes.
Posted by Tom B. at 6:44 AM