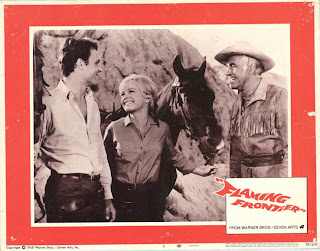 A bandit gang led by Jack O’Neal nicknamed "The General" robs a train of the Railway Union Bank-Insurance (UBRI) Ltd.. of an army payroll. A short time later, some settlers are on the run from what they think are a band of Indians, after they have killed a buffalo. The son of Farmer Mac O’Hara is shot and killed and it is made to look as though the Indians were to blame for his death.

Old Surehand has just enough time to free the passengers trapped by the bandits in the train shortly before they blow it up. On the way to Mason City Surehand meets a group of gold miners and one named Ben accompanies him to town. In Mason City, Ben meets his niece Judith and her fiancé Toby, who works as a lawyer under Judge Edwards. Judge Edwards informs Surehand that he still has no new information on the killer of his brother.

Tou-Wan, the son of Comanche chief's Maki-Moteh who wants to pursue justice in Mason City against the attacks of the bandits is shot and killed by a sniper. Behind the murder is ‘The General’ who is also behind the killing of the buffalo in order to incite the Indians to start a war with the whites so he can sell them weapons.

The Comanches, now on the verge of war, because of the murder of their chief's son. They kidnap Toby, and Judith, and prepare to let them die at the stake. With the promise to uncover the true murderer, Old Surehand is able to obtain their release.

The bandits try to get rid of Old Surehand through the treachery of a beautiful woman named Delia. Surehand and his crew spend a night in an old coaching inn and are given ample glasses of wine. Surehand sees through the plan and thwarts the bandits waiting in ambush. Meanwhile, Toby is again taken prisoner by ‘The General’ and hidden in a limestone cave. Winnetou silently sneaks into the cave and frees Toby.

‘The General’ has provided the Comanches with defective cartridges, who lay in ambush to attack a group led by Army Captain Miller. Old Surehand warns them in time and, together with Winnetou, and Maki-Moteh the Comanches are convinced of the false promises of ‘The General’. The Indians and soldiers stage a fire fight to lure in the bandits and they defeat them together. As ‘The General’ is seen fleeing with Old Wabble as a hostage, Surehand kills him with one well aimed shot.

YouTube link: http://www.youtube.com/watch?v=4hkpbWWY9Yw
Posted by Tom B. at 6:38 AM