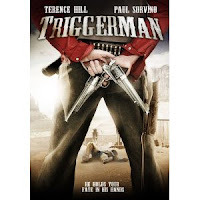 "Triggerman" is the second episode of the Doc West TV series. Filmed near Santa Fe, New Mexico in 2008, the film stars Terence Hill, a retired doctor, now a wandering gambler who after episode one wants to start a hospital in the town of Holly Sand.

West is a twinkly-eyed, stubble-faced softy who leaps at the chance to help a small town in its quest to build a hospital. To raise the money, West and the town’s sheriff, played by Paul Sorvino, decide to put together a high-stakes poker tournament, one Doc West is sure to win, as he’s not only a medical expert and an uncannily accurate quick gun, he’s the world’s best poker player.

In a scene that’s reminiscent of Sam Raimi’s The Quick and the Dead, the small town in need of a hospital quickly becomes a beacon light to some of the nastiest, most ill tempered ruffians in the west. They make their way to town in order to participate in the tournament, all bringing with them a back-story that somehow ties them in their past to Doc West.

Among the new visitors to town is the movie’s titular Triggerman, a Dutch hooligan with a quick temper and a vengeance towards Doc West for previously besting him in a poker tournament. The film’s villain is the type of coward that will shoot a man in the back or kidnap a woman to ensure Doc West is too distracted to win a game. Don’t expect many shoot-outs or acts of daring-do in "Triggerman", though. The film’s idea of high stakes is scene after scene of poker playing — all the games relying on that same tired paused reveal of a player’s hands that every bad poker movie relies on.

The film is filled with secondary plots, from a young boy’s determination to become a gunslinger to two brother’s wooing of young women. Many of these sub-plots seem to be carry overs from the previous film, Doc West. None of them add anything of substance to "Triggerman", though — they only lengthen the running time of the movie.

Even though the movie was filmed in New Mexico, directors Giulio Base and Terence Hill filled the movie with a lot of Italian actors, necessitating the dubbing of many of the movie’s lines. While, for the most part, this dubbing is not too distracting, it certainly doesn’t help to add to the film’s appeal either. In a movie that’s easy to mock, the dubbing of Italian actors’ lines is just fuel for the fire.

Region 1, presented in 1.78.1 widescreen ration with 5.1 Dolby sound the production values are top notch and the film is sharp with lush, crisp colors. English and Spanish subtitles. Running time 97 minutes.