A FISTFUL OF DOLLARS 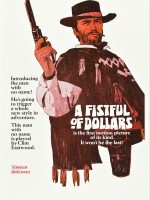 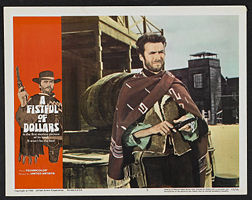 A stranger rides in the Mexican border town of San Miguel. He’s approached by a bell ringer who advises him to join either the Baxters or the Rojos or he will soon be dead. A group of Baxter’s henchmen shoot at the Stranger’s mule and he escapes by grabbing onto to an innkeeper’s sign. The innkeeper, Silvanito, invites him in and they discuss the state of the town’s condition where the two rival gangs control the area. The Rojos are gunrunners while the Baxters control the whiskey.

The Stranger sees and opportunity to make some money from the situation and quickly becomes a Rojo henchman after killing the four Baxter henchmen who shot at his mule in a duel.

When a load of gold arrives in town, escorted by a troop of Mexican soldiers the Man with No Name becomes curious and follows the cargo the next day along with Silvanito. They witness the massacre of the Mexican soldiers by Ramón Rojo and his henchmen disguised as American soldiers.

Ramon now seeks peace with the Baxters, as sooner or later the massacre will be investigated by Mexican and American officials. The Stranger makes a fistful of dollars by selling information on the massacre to John Baxter and his wife, the real brains behind the gang. The Stranger has taken two of the dead Mexican soldiers to the local cemetery and propped them up against a tombstone making them look wounded but alive. He then informs the Rojo’s the Baxters have two of the soldiers hidden out in the cemetery. The two gangs have a shoot-out at the cemetery and while this is going on the Stranger searches the Rojo hacienda for the hidden gold. Finding it he also is found by Marisol a beautiful villager who is being kept by Ramón for his own pleasure.

Marisol was taken for payment of a gambling debt owed by her husband Julio.

Ramón returns with Antonio Baxter, John’s son, and the Stranger takes Marisol to the Baxter’s for another fistful of dollars and to be used in exchange for their son. The exchange is conducted on the main street the next day. Julian and his son Jesus appear and for a moment the family is reunited. The Stranger learns of their plight but returns Marisol to Ramón. Ramón now leaves for a business trip and leaves Marisol at a small house outside of town. After Ramon leaves the Stranger pretending to be drunk and dumped in his room, leaves and kills the Rojo henchmen keeping Marisol prisoner. The Stranger again reunites the family, gives them some money and sends them away.

Returning to the Rojo hacienda he finds Ramón waiting for him. The Stranger is badly beaten by the gang who try to obtain Marisol’s whereabouts. Finally they leave him for tomorrow’s beating but he manages to escape killing two of the gang members and setting the hacienda on fire by burning the wine celler.

Helped in escaping town by Piripero, the local coffin maker he witnesses Silvanito being beaten for information on the Stranger and the complete massacre of the Baxters.

Hiding out in an abandoned mine he recovers with Silvanito and Piriperos help. The time now comes to face the Rojos. The Stranger announces his return by setting off a dynamite charge and walking into town. The Rojo’s are there to meet him and Ramón and his trusty rifle put a bullet through the Strangers heart. The gunman falls but rises again. Ramón empties his rifle into him with no effect. When

The Stranger takes two of the bodies to a nearby cemetery and sells information to both sides that two Mexican soldiers survived the attack. Both sides race to the cemetery, the Baxters to get the "survivors" to testify against the Rojos, the Rojos to silence them. The factions engage in a fierce gunfight, with Ramon managing to "kill" the "survivors" and Esteban capturing John Baxter's son, Antonio. While the Rojos and the Baxters are fighting, the Stranger searches the Rojo hacienda for the gold, but accidentally knocks out Ramón's beautiful prisoner and unwilling mistress, Marisol when she surprises him. He takes her to the Baxters, who in turn arrange to return her to the Rojos in exchange for Antonio.

During the exchange, the Stranger learns Marisol's history from Silvanito: "... a happy little family until trouble comes along. And trouble is the name of Ramon, claiming the husband cheated at cards, which wasn't true. He gets the wife to live with him as hostage." That night, while the Rojos are celebrating, the Stranger rides out and frees Marisol, shooting the guards and wrecking the house in which she is being held in order to make it appear as if it was attacked by the Baxters. The Stranger tells Marisol, her husband, and their son to leave town, at the same time giving them some money to tide them over. Marisol asks the Stranger, "Why do you do this for us?", and for the first and only time the Stranger provides an insight into his actions: "Why? Because I knew someone like you once. There was no one there to help. Now get moving".

Discovering that he freed Marisol, the Rojos capture and beat the Stranger, but he escapes. Believing the Stranger is being protected by the Baxters, the Rojos set fire to the Baxter home and massacre all the residents as they are forced to flee. Among the dead are John Baxter, his wife, Consuelo, and Antonio. Now the only gang left in San Miguel, the Rojos confront and beat Silvanito, whom they think maybe hiding the Stranger.

The Stranger recuperates in an abandoned mine and returns to town, where he faces the Rojos in a dramatic showdown. With a steel chest plate hidden beneath his clothing, he taunts Ramón to "aim for the heart" as Ramón's rifle shots bounce off. Killing all present except Ramón, the Stranger challenges Ramón to reload his rifle faster than he, the Stranger, can reload his pistol. He then shoots and kills Ramón. Esteban Rojo, unseen by the Stranger and aiming at him from a nearby building, is shot dead by Silvanito. The Stranger says his goodbyes and rides from the town. 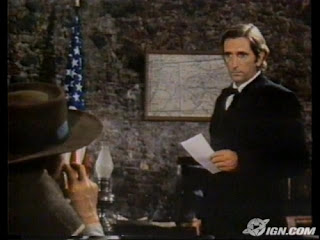 [When first shown on CBS-TV in 1977 it was feared the film was to violent and the hero too corrupt for TV audiences, so an introduction was filmed by director Monte Hellman with Harry Dean Stanton as a warden who releases “The Man with No Name” from prison in exchange for cleaning up the town of San Miguel. The actor who played Clint remains unknown and only Clint’s eyes were shown from stock footage]

YouTube link: http://www.youtube.com/watch?v=gqvK80XGJkA
Posted by Tom B. at 6:45 AM