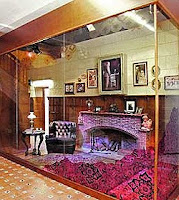 Almeria and the Beatles, joined by film and music

In Almeria a private museum Casa del Cinema opens, dedicated to the major film productions filmed there in the same house in which John Lennon composed “Strawberry Fields Forever.”

Through research of the association John Lennon Almeria Forever revealed that a member of the Beatles stayed at Cortijo Romero in 1966 during the filming of How I Won the War, directed by Richard Lester .

The house is now the new Casa del Cinema in Almeria, a place dedicated to the abundant presence of Hollywood in the city and province, the scene of hundreds of films shot in the mid-twentieth century.

It was in this house where John Lennon wrote the song Strawberry Fields Forever , which was later included in the album Magical Mystery Tour . After that and for more than 20 years, the city saw an explosion of films due to its natural landscapes and, of course, light and sunny climate. Many movies were filmed in Almería, and so in the museum can be seen films like “Lawrence of Arabia” and “Death Rides a Horse”. From Sergio Leone to Steven Spielberg , there are dozens of filmmakers who filmed sequences in Almeria.

The museum also includes photos, videos and memories of the actors and actresses who were there, such as Clint Eastwood , Claudia Cardinale , Raquel Welch and Alec Guinness.