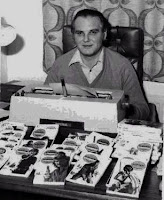 After the success of The Man With No Name trilogy of films, a series of books were released that covered the three films, but also added a few more adventures for the Stranger made famous by the Leone films. The first of the these books was “Fistful of Dollars” and is based on the screenplay of the film. This book, although part of the series of ‘Dollar’ books was not released in the United States but was only available in England. The author was Frank Chandler but like many of the actors in the Spaghetti westerns this was a pseudonym for writer Terry Harknett. He’s probably the most influential British western writer in the last half of the 20th century. Terence William Harknett was born on Rainham, Essex, England on December 14, 1936. Originally Terry wanted to become a car mechanic but after his schooling at Rainham Secondary Modern School in 1951 he became a reporter. He went to work as a copy boy at Reuters News Agency. Later he became a typist at Reuters Comtelburo and in 1953 wrote and sold his first short story ‘Katie’s Birthday’, a romance novel. With little background other then the westerns he had seen in the theaters, he wrote his first western short story ‘Guns at the Silver Horshoe’ which appeared in the January 14, 1955 issue of Reveille. He then went into military service until returning to civilian life where he went to work as a publicity assistant at the British office of 20th Century Fox. In 1960 he married Jane Harman and became a reporter and features editor for National Newsagent a weekly book trade magazine. 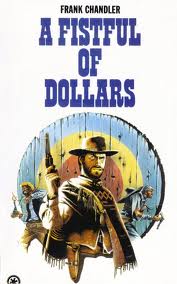 Terry’s first western novelization was for an adaptation of the film “A Town Called Bastard” (1971) using the name William Terry. Following this was “A Fistful of Dollars” in 1972 as Frank Chandler. Again as William Terry he turned out adaptions of “Hannie Caulder” and “Red Sun” both in 1972. He was then commissioned to write four original westerns. He didn’t think he could do it, but he was told he could write and he had seen western films so what more of a background did he need. He later said it was an easy world to get into as long as you keep your guns correct. He researched his subject matter as he went along. When he started to write the ‘Edge’ series he stopped watching westerns on film and TV, fearing he’d copy something he’d seen. Using the name George G. Gilman he began with ‘The Loner” in 1972. The Edge character was completely new to the western book world. He was violent, anti-social, and chauvinistic. He only survived in his Spaghetti Western world by being twice as mean as his opponents. Writing from nine to five, five days a week, Terry could turn out a book in eleven days. After the Edge series he created another anti-hero in Adam Steele. Other characters developed were Jubal Cade, Apache, and Undertaker. In all Terry wrote some 130 westerns in seventeen years, 60 Edge adventures alone. 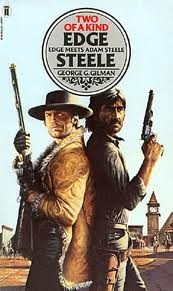