Who are Those Guys? - Renato Baldini 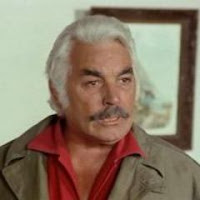 ﻿Renato Baldini was born on December 18, 1921 in Rome, Italy. He made his film debut in 1943 in the film “Harlem”. After World War II he began to appear on Italian television in soap operas. He then entered films on a continuous basis, over 85 films until the early 1980. With his white hair and dark eyebrows he was one of the most recognizable faces in Euro-westerns from early appearances in the Karl May westerns, “Frontier Hellcat”, “Last of the Renegades” and “The Desperado Trail”. He would then become a regular in Italian westerns sometimes using the aliases Ryan Bladwin and King MacQueen in such films as “Dynamite Joe” (1966), “Clint the Stranger” (1967) “Lynching” (1968), “The Return of Hallejuah” (1971) and “The Genius” (1975). Baldini appeared as a character actor to supporting roles in dramas and comedies. Late in his acting career he made occasional appearances in RAI-TV dramas and thrillers. Baldini died in Rome on July 5, 1995 at the age of 74.