Who Are Those Singers & Musicians? ~ Carol Andre 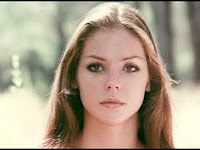 Carol André Smith was born in Paris, France on March 11, 1953. She is the daughter of actress Gaby André (Gabrielle Louise Mathilde Andreu) [1920-1972] and the sister of producer, writer E. Jeffrey Smith, She took her acting name from her mother and became Carol André Growing up in Rome as the daughter of French actress Gaby André and American businessman Ely Smith, Carole André already spent time on the sets of Cinecittà at a very early age. In an interview, she remembered she "was always happy at Cinecittà. It felt like I was in another dimension, where crazy things were normal." In 1967, her mother was invited to Tomas Milian's home and showed him family photographs. Milian, who at the time was starring in the Spaghetti Western “Face to Face”, presented them to the director, Sergio Sollima, who agreed to cast Carole, then 14 years old, in a small part. There followed another small part in another Spaghetti Western later that year. At the age of 15, she acted in Mario Monicelli's black comedy :Oh, Grandmother's Dead” (1969). In 1976, André became famous when Sergio Sollima, gave her the role of Lady Marianna, "Pearl of Labuan", in the successful TV series ‘Sandokan’, which subsequently also received a theatrical release. After this, and having in brief succession lost both her parents to tragic circumstances, André left the world of cinema to devote herself to her partner, the producer Paolo Infascelli, and their newly-born son Elia Infascelli-Smith, moving to live among relatives in America and also studying architecture and interior design. In 1980, she returned to Italy and appeared intermittently in a number of TV serials and cinematic films until the early 1990s. At the age of 40, André developed a passion for swimming and started to compete in swimming tournaments for seniors. In 2018, she won the 200-meter freestyle race at the "Campionati Regionali Master Lazio" at the Zero9 pool in Rome under the name Carole Wendy Smith, setting a new record. Today André now holds the position of International Marketing Director at Cinecittà