We continue our search for filming locations for “Run, Man, Run. The scene now shows a woman, Riza’s woman, in labor. Riza tells her to hold back for three more days as he doesn’t want the baby to be born in Texas and a gringo. In Riza’s camp we find the Frenchmen who promise Riza the rank of colonel if he help them capture Cuchillo. Four of his henchmen ride into Burton City and assault the jail and the deputy. Cuchillo throws Cassidy a spoon and tells him to unlock the cells. Cuchillo dressed in his American clothes tries to trick the henchmen but they take him from his cell and lead him to the office. Cassidy suddenly appears and shoots two of the men while Cuchillo knife’s the third. Cassidy springs to the door and shoots the fourth henchman who is riding out of town.

This scene was filmed at the Elios western set in Rome, Italy. 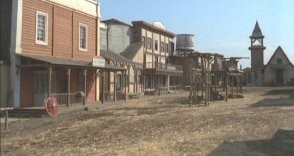