50th Anniversary of the premier of “Requiem for a Bounty Hunter”.

Today marks the 50th anniversary for the premier of “Lo ammazzo come un cane ma lui rideva ancora” (Requiem for a Bounty Hunter), directed by Angelo Pannacciò using the alias Mark Welles and starring Michael Forest, Steven Tedd Giovanni Petti and Suzanna Levi. It tells the story of Nick Burton (Forest) who returns home to find his daughter Jane traumatized, his wife Marilyn and her father James brutally killed. Jane is left in the hands of Dr. Simon (Chet Davis), her boyfriend (Chet Davis), and the faithful Martha while Burton begins hunting the killers without any clues on who they are or how to recognize them. However, near the ranch he meets Kimble (Steven Tedd), a gunman who is also called "Whistle" for his habit of playing the lullabies on his flute in his spare time. But Kimble who was actually part of the gang led by Ramson (Antonio Molino Rojo) and was one of the participants of the massacre at the Burton ranch accepts the invitation from Nick to help him in revenge for compensation and takes the opportunity to go in order to eliminate any of the robbers before they can speak. Kimble also manages to avoid the unjust charge against him by Ramson’s brother the sheriff. Killing Ramson, Kimble now believes his secret is safe. Nick returns to the farm where the truth is revealed by Jane that she was raped during the massacre. The girl without telling her father recognizes the rapist as Kimble and justice is then served.

Song: “A Man is Made of Love” sung by Ann Collin 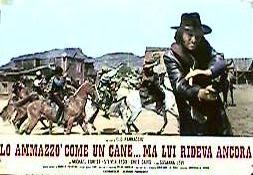