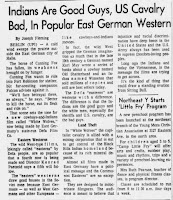 BERLIN (UPI) – A cold wind sweeps the prairie outside the East German city of Halle.

The horse of Cunning Fox has fallen, its weakness brought on by hunger.

Cunning Fox wants to ride into Fort Robinson for shelter, but far-scouting companion Falson advises against it.

“We’ll face betrayal there, as always, he says, “Better to kill the horse, eat its flesh and ride on.”

That scene sets the tone for a new cowboys-and-Indians film called “White Wolves” now being made by East Germany’s state-run Defa Film Co.

The wild West-type films jokingly called “easterners” by Defa people. Are so popular that a fourth now is being made and director Konrad Petzold says a fifth will follow.

The “Eastern” westerns draw good houses in the Soviet zone because East Germans and other Europeans – like cowboys-and-Indians movies.

In fact, the wild West gripped the German imagination so much that in the late 19th century a German named Karl May wrote a series of books about a cowboy named Old Shatterhand and an Indian named Winnetou that sold millions of copies and still are best sellers today.

The Defa “Easterns” are westerns with a difference. The difference is that the Indians are the good guys and the white men, especially the sheriffs and U.S. cavalry, are the bad guys.

In “White Wolves” the capitalist cavalry is allied with a mining corporation that is out to get control of the Black Hills Indian homeland because of its rich mineral deposits.

Almost all films made in East Germany have a political message and the Communist Easterns are no exception.

They are designed to indoctrinate filmgoers. The audience is meant to believe that injustice and racial discrimination have deep roots in the U.S. Army has always been used to suppress freedom-loving peoples.

Long ago the Indians and today the Vietnamese, is the message the films are trying to get across.

It’s the kind of thing that could draw a standing ovation from Sitting Bull.