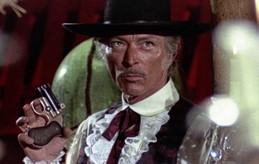 ONCE Sergio Leone had managed to mould the classic Italian Spaghetti Western format into something approximating high art with his peerless Dollars trilogy in the 1960s, any number of similarly inclined film makers followed in his dusty footsteps.

All were seeking to create the next 'man with no name' anti-hero and claim a bit of the lucrative box office bonanza for themselves.

One of the finest to emerge was director Gianfranco Parolini, who delivered the excellent 'Sabata' series that originally ran for three films from 1969 to 1971 and now appears on a brand new Blu-ray boxset courtesy of Eureka Home Entertainment.

As a trilogy of seriously sweaty, hugely entertaining and effortlessly stylish hyper westerns, the Sabata franchise is certainly fun even – if it's a classic case of diminishing returns.

The first film, titled simply Sabata, is easily the best thing on offer here. It stars the great Lee Van Cleef, fresh from iconic performances in both For A Few Dollars More and The Good, The Bad And The Ugly and boasting a CV that included unforgettable appearances in everything from Gunfight At The OK Corral to Liberty Valance. He plays our amoral anti-hero and his moody but avuncular turn as the black hatted gun man is marvellous throughout.

A classic story of local small town corruption and a bank robbery foiled by a sharp shooting loner, it's a neat little mini-masterpiece of the genre. 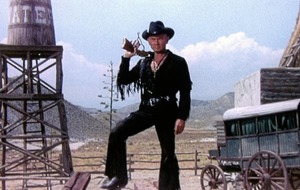 By the time it came to wheel out the inevitable sequel to Sabata's mighty box office receipts, the film's star was unavailable – committed as he was to a Magnificent Seven follow-up – so the role of the slyly sinister killer with a wry smile went instead to Yul Brynner.

While on paper that may seem a good move, Brynner doesn't really work in the position vacated by Van Cleef, opting for a straight-ahead Western gunman performance devoid of the oddness that marked out the first film as something special.

In fairness to Yul, much of the problem seems to stem from the fact that he'd originally signed up for a completely different Western that was swiftly re-tooled as a Sabata follow-up when the money started rolling in.

Adios Sabata certainly isn't a bad film and the bold Brynner is always worth watching whatever the role, but compared to the first outing for the central character it leaves you feeling just a little bit underwhelmed.

Van Cleef was back as the main man for the last Sabata epic and while Return Of Sabata is no masterpiece, it's still a brilliantly diverting little slice of cheap and cheerful Wild West wonder.

By the time Parolini's final offering limped onto cinema screens in 1971, the Italian Western craze was on the wane – but there's still much to enjoy in its mad, circus like visuals all the same.

As a full-blown film franchise, these two-fisted tales of comic book mayhem may not be recalled with the same reverence as Leone's Dollars trilogy, but the Sabata series remains one of the most satisfying servings of Spaghetti Western all the same.