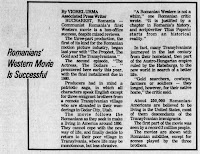 The three-part production, the first of its kind for the Romanian motion picture industry, began last year with “The Prophet, The Goldand the Transylvanians.”

The second episode, “The Actress, The Dollars … “ premiered here early this year, with the final installment due in 1980.

Producers had in mind a patriotic saga, in which all characters speak English except for three emigrant brothers from a remote Transylvanian village who are stranded in their wanderings in Cedar City, Utah.

The movie follows the Romanians as they seek to make a living in America around 1880. They cannot cope with the new way of life, and finally decide to return to their poor village in Transylvania, where life may be monotonous, but less abrasive.

“A Romanian western is not a whim,” one Romanian critic wrote. “It is justified by a chapter in Romanian history, and scriptwriter Titus Popovic starts from an historical reality.”

In fact many Transylvanians journeyed in the last century from their homeland, then part of the Austro-Hungarian empire ruled by the Hapsburgs, to the new world in search of a better life.

“Gold searchers, cowboys, farmers, or soldiers – they longed, however, for their native home,” the critic said.

About 250,000 Romanian-Americans are believed to be living in the United States, most of them descendants of the Transylvanian immigrants.

The first part of the movie was seen by a record 3 million people.

The movies are shown with Romanian subtitles, except for scenes played by the three brothers.