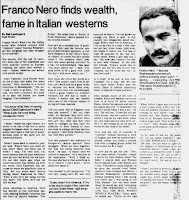 Franco Nero? Wasn’t he the Italian actor who fiddled around with “Camelot” costar Vanessa Redgrave, got her pregnant and the dropped out of the movie?

Not exactly. For the last 10 years, he’s been one of the wealthiest and most popular actors in Europe, cranking out about four movie a year – Italian westerns and adventure stories mostly.

“After Camelot,” Jack Warner wanted me to stay and make five more movies.” Nero recalled in a recent interview in Minneapolis. “No, no,” I said, “I have to go back.” “No,” they said, “you have a contract.” So I started to play the Italian, you know, begging. I’m homesick.”

“I think I made the right choice. Its better to be one of the two or three biggest European stars. In America I would have been a fish out of water, because most of the parts are for American actors.

“When I came back to America, people said, “Where have you been all this time? Have you been out of work?” I said, “I’m very rich. I’m more famous than all your American stars all over the world, but not here. It’s not like years ago, when an American actor was famous all over the world. Clint Eastwood, yes, because he made his popularity first in Italy. But you know what they’re saying about Eastwood in Italy? “What a pity he’s not doing movies any more.” For them, he’s not the idol he was.

Since returning to America, Nero has starred in two television specials, playing Rudolph Valentino and the hero of Harold Robbins’ “The Pirate.” His latest film is “Force 10 From Navarone.” Which opened Friday at area theaters.

Now he’s on a national tour to publicize the film, and the favorite subject of interviewers, naturally, is l’affaire Redgrave. It isn’t Nero’s favorite subject, of course, but he’s candid about it. For instance, didn’t they once talk about getting married? In a way, he acknowledged, “She said, ‘You must marry me.’ I said, ‘You must prove to be a good wife. Until that day, I will marry you.’”

How could she prove her worth as a wife? “She mustn’t work, first of all. You can’t work and be a good mother, because the work takes away most of your time. I’m old fashioned. I have great respect for women’s freedom, but one has to make a choice. I prefer that the mother takes care of the children instead of having all those nannies.

Was this peasant’s son bothered by Redgrave’s radical politics? Nero shrugged. “When we’re together, she was not being involved that much,” he said. “It wasn’t until we started to separate.” As a reaction to the separation? “Well, I think so. Because she had to find something to do or believe. I don’t know. I never asked her about it.”

Nero himself is still unmarried. “I’m still very young (he’s 37) and very insecure to marry. I’m not grown up enough yet. Have to wait. In this country you exaggerate about marriage. Every time I’m in America, if I try to be nice to a lady I like, take her out two, three times, right away she wants to marry me. I’ve had at least 50 episodes in the last two, three years. When a girl asks me. I say “Ah, how can I marry? I’m still in love with Vanessa.” So she tells her friends , “Franco would like to marry me, but he loves me too.’ So they feel nice.”

Is it true? Is he still in love with Vanessa? In a way, yes. We still love each other. Every time we meet, there is always something there. A little bit of hate and love.

Nero spends much of his time in London, Paris and Madrid, but home base is a farm 20 miles outside of Rome, where his parents and one of his sisters also live. “I remember my father’s words when I was a boy,” he said, “He told me. If one day you get some money, buy me a piece of land where I can do my own work, make my own wine and my own olive oil.’ He’s 75 but strong as an ox and he works all day long in the fields.”

Nero won the role of Lancelot in “Camelot” without knowing a word of English and with no musical background, unless you count a student stint in a singing group called the Hurricanes for $2 a night.

So how did he get the job? “Two, three years before “Camelot,” I made a movie for John Huston called “The Bible.” I played Abel and Richard Harris played Cain. John Huston said to me. “You have to learn English,’ so he gave me records from Shakespeare phonetically without knowing what I was saying, and every day I was going to see John Huston. ‘let me hear something.’ He would say, and I was going, ‘ALL THE WHORLEDS A STAGE, AND ALL THE MAN, WOME MERELY PLAYERS,’ ‘Good, good,’ he would say. ‘You’re on the right track.’

“When Joshua Logan was looking for actor to play King Arthur and Lancelot, he wanted somebody new. One evening he had dinner with John Huston, and John Huston suggested both of us, Richard Harris and then Joshua Logan said, ‘Who is this Franco Nero?’ John Huston said, He’s quite good, quite popular, you better go see him.’

“So he came to see me. He asked me. ‘Do you speak English? I said ALL THE WHORLEDS A STAG.’ He said, ‘Do you want to come to Los Angeles, to Hollywood to do an American movie?’ I said, ‘Look my career is so wonderful here I won’t move from Italy.’ He said t me, I remember. ‘You will accept my offer, don’t worry.’ He was so sure of himself.

“When I arrived in America he gave me this professor from UCLA and we worked every single day, every single day. Them we started the movie. I worked for me because I had not many lines just battles.”