Like The Good, the Bad, and the Ugly, this movie utilized the use of Techniscope. This was done for two reasons. The first was the cost in savings from the in-camera negative. Secondly, was the ability to derive the 2.35:1 aspect ratio while shooting with spherical lenses. This avoided the distortion created by anamorphic lenses during certain camera moves, as well as extreme close-ups. 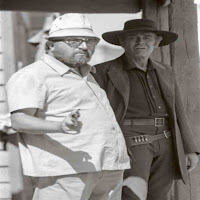 The film’s interiors were shot in Rome at the legendary Cinecitta Studios. The majority of the exteriors were filmed in Spain, in Almeria and Granada. The films involving the Sweetwater Ranch were primarily shot in the Tabernas Desert.

“In Almera, Sergio even had two kilometres of railway built and arranged for the locomotive and wagons to be transported to the canyon on the location. When he had made up his mind about something like that, it was impossible to change it.”

There was also some additional shooting that was done in the United States, a first for a Leone film. Monument Valley was used as the backdrop for some of Jill’s journey to Sweetwater. Also, Harmonica’s “origin story” flashback was filmed 15 miles north, in the remote Utah landscape. 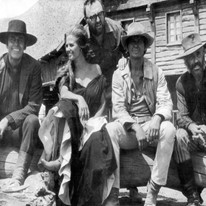 While on location in Spain, Al Mulock, who played one of the three gunmen in the opening sequence, ended his life by jumping from his hotel window in full costume after a day’s shooting. While Claudio Mancini was desperate to get Mulock to a nearby hospital, Leone was more concerned about the costume the actor was wearing. This could be salvaged and reused by another actor later in the picture.

To make himself appear more villainous, Henry Fonda showed up to the set with a freshly grown beard, as well as wearing brown contact lenses. Leone had wanted him clean-shaven and with his real blue eyes. The director wanted the audience to recognize Fonda, who had never before played a villain.

“Picture this: the camera shows a gunman from the waist down pulling his gun and shooting a running child. The camera pans up to the gunman’s face and…it’s Henry Fonda” 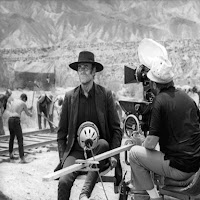 Legendary composer Ennio Morricone began to compose the score from the script prior to the beginning of production. This is despite the fact that the script was drastically changed from the version Morricone was using, and that most of his music was integrated into the movie. One instance where that was not the case was the opening sequence where no music was used, with sound effects taking its place.

Once Upon A Time In The West was released in Europe with a 166-minute cut. It was a huge hit in Germany, where it remains the third highest-grossing movie of all time (13 million tickets sold), adjusted for inflation. In France, the film is seventh all-time (14.8 million tickets sold). The film was so popular in France that it played continuously in theatres for over 2 years.

Once Upon A Time In The West fared less well in the United States, where its run-time was cut to 145 minutes. The film had a disappointing box office of only $2.1 million on its $5 million production cost. 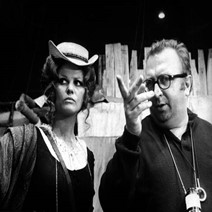 Critically, Once Upon A Time In The West did okay, with typical reviews giving it an average score. As the years have passed, the film has grown in stature with the critics.  The film is frequently placed in the top 100 on people’s “Best of” movie lists. This includes publications such as Time and Empire magazines.

Filmmakers including George Lucas, Martin Scorsese, and Quentin Tarantino all cite it as being a huge influence on their work as directors.