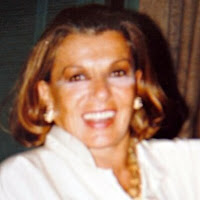 Italian costume designer, writer and widow of Sergio Corbucci, Nori Corbucci died in Rome, Italy on February 3, 2021. Born Eleanora Bonicelli in Naples, Italy, in addition to being a respected costume designer, she was also a writer: in 1981 one of her poetry books, Oltre l’idea (Beyond the Idea), was selected for the Viareggio prize. Subsequently, she wrote esoteric fairy tales and there are several publications to commemorate her missing husband. Nori was costume designer on “Hellbenders” (1967), a caterer on “The Big Silence” (1968) and appeared as herself in the short documentary “An Indian Named Joe” in 2009.
Posted by Tom B. at 7:59 AM