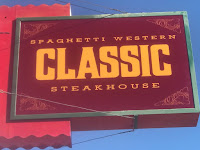 Classic Spaghetti Western Steakhouse north of downtown is closing at the end of July.

Owner Kade Mislinski announced in a Facebook posting Friday morning that the restaurant on North Stone Avenue would close at the end of business on July 28, roughly 10 months after Mislinski opened.

“Summer got us,” he said. “The food was great, the concept was great.”

Classic, which specializes in, as the name announces, spaghetti and steak, opened in the middle of September. It built on the theme of spaghetti Western movies that were produced by Italian filmmakers, with film posters decorating the dining room.

Economics aside, Mislinski said the closure frees him to spend more time with his family.

“I’m almost 44. I just need to slow down,” said the father of two. “I just kind of want to get back to traveling and being back with my family.”

Mislinski made his first big splash into Tucson’s restaurant scene when he opened Hub Restaurant & Creamery on East Congress Street in 2011, which he left after a few years. He also owns and operates Mulligans Sports Grill at 9403 E. Golf Links Road and Passe at 415 N. Fourth Ave.

Mislinksi said he spends mornings in the kitchen at Passe and afternoons at Besties, which he opened in April in the former Mother Hubbard’s restaurant that Mislinski co-owned with Kelzi Bartholomaei. Bartholomaei stepped away from the nearly 50-year-old business last November, and Mislinski decided to take the restaurant in a new direction.

Besties specializes in steamed burgers similar to those made famous by Midwest fast-food giant White Castle and Ted’s Restaurant in Connecticut. In the months since it opened last spring, Besties has garnered a devoted following.
Posted by Tom B. at 5:32 AM