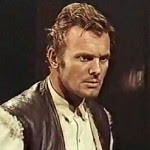 Onetime teen heartthrob Tab Hunter, who starred in films like “Damn Yankees” and “The Burning Hills,” died in Santa Barbara, California on July 8, 2018.. He was 86 years old. Hunter was born on July 11, 1031 as Arthur Kelm in New York City, but grew up in California with his mother, brother and maternal grandparents. Hunter, who was known in Hollywood as “The Sigh Guy” for his blond, surfer-boy looks, died Sunday night at his home in Santa Barbara County. He died of a blood clot, according to a representative. He starred in more than 40 films, and was a big name in the 50s and 60s. He also dabbled briefly with a musical career, and continued to work into his 70s as a film producer. Hunter starred in one Euro-western: 1968's "Shotgun" as Sheriff Durango.
Posted by Tom B. at 6:41 AM