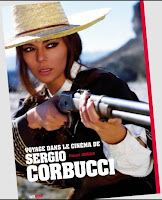 President of the Association Regard Indépendant, Vincent animates since 1999 the Rencontres Cinema and Video in Nice around the cinema which takes a step aside. Traveling in Sergio Corbucci's cinema is his first work.
Posted by Tom B. at 6:26 AM