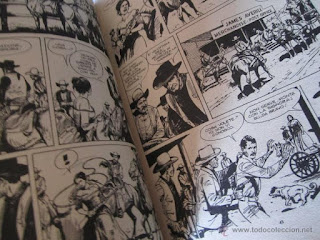 Sheriff Frank M. Canton was most notable for being the judge of Johnson County, Wyoming during the 1890s and he was the key player in the Johnson County War. He lead cattlemen and gunfighters all over the county to intimidate and drive off small farmers to allow more range for the rich and powerful. His real name was Joe Horner, born near Richmond, VA in 1849. As a child his family moved to Texas where he became a cowboy, and worked the trails from Northern Texas to Kansas in the late 1860's.

His life of crime began in 1871 when he started robbing banks and rustling cattle.  In 1877 he was jailed for robbing the bank at Comanche, Texas. He escaped jail and returned to herding cattle. He took a herd up to Nebraska where he officially changed his name to Frank Canton and vowed to give up his outlaw ways.

And that’s when he got into protecting the wealthy.  He was hired on as a detective for the Wyoming Stock Grower's Association, a group of powerful cattlemen determined to drive out any small rancher or farmer who settled in Johnson County.  He ran his own ranch near Buffalo, Wyoming and was later elected sheriff of Johnson County.

He married in 1885, and had two daughters; one died in early childhood. He resigned his office as sheriff and went back to his old job with the Wyoming Stock Grower's Association. At the same time he was made a US deputy marshal. However, he clearly worked for the big cattlemen, and enforced the law as they wished.

Soon after, Canton joined Frank Wolcott's regulators, a group of more than fifty gunmen hired by the cattlemen to drive the settlers out of the  County.  A violent incident in which two men were killed in early 1892 left a bad taste in his mouth, so he quit the cattlemen and left Wyoming for Oklahoma.

In Oklahoma, Canton served as a deputy marshal for Judge Isaac Parker, and quickly made a name for himself as a lawman that would stand up to any outlaw (1895-1896)

Canton left his family in 1897 and accepted an appointment as U.S. Deputy Marshal in Alaska.  Canton’s adventures became quite well known and he reportedly tamed the entire lawless town of Dawson.  He befriended a writer named Rex Beach who then used Canton as the role model for many of the frontier heroes he portrayed in his novels.

The harsh Alaskan winter of 1898 took a great toll on Canton’s health and so he returned to Oklahoma and once more became a lawman.  In 1907, Canton became the adjutant general of the Oklahoma National Guard and held that position until his death in 1927.