I read almost all his novels and the few that I have not read yet are waiting for me, I always keep someone ready, like something good, delicious, to taste.
I love his brilliant style, lean but at the same time rich, where nothing is superfluous. It accompanies you in reading with a sustained, fast and irresistible rhythm of those who capture you, in fact, they kidnap you.
And then, suddenly, the twist that spreads out or the joke that makes you laugh laughing alone. That pause that suspends the rhythm for an indefinite moment, after which the rhythm returns more tightly than before.

Joe R. Lansdale is one of the most important contemporary writers. He was called the "Stephen King of Texas", because he is Texan and Texas, especially the Eastern one, is the scene of most of his novels. But Lansdale is basically Lansdale, in his novels we find a mixture of thrillers, pulp, black comedy and social satire, often in settings from early twentieth century westerns and sometimes horror, science fiction or steampunk. Numerous his novels of training and those in style dime novel. From his beginnings as a writer - in 1980 with "Atto d'amore", published in Italy by Fanucci - he wrote dozens of novels and many stories that earned him prizes and literary awards including five Bram Stoker Awards, the British Fantasy Award and the American Mystery Award, the New York Times Notable Book Award, the Booklist Editor's Award. Landale often comes to Italy, in particular to Turin, a guest at the Book Fair and the Circolo dei Lettori.

A lover of comics since he was a child, Lansdale has tried several times in the screenplay for comics and animation films. In particular for the comics he wrote several episodes of the western-horror dedicated to the scarred knight Jonah Hex (published in Italy by Planeta DeAgostini, Magic Press and RW Lion), an adventure of Batman - then turned into a novel - "The long road of revenge ", a story by Conan," The Song of the Dead "(published on issue 10 Cult Comics by Panini Comics), a 4-issue miniseries on" The Lone Ranger and Tonto "(published in the USA by Topps in 1994 and as far as I know, unpublished in Italy), an episode of "30 days of night - new night" (published by Magic Press) and some graphic novels published by Editions BD and GP Publishing: "The wings of hell", " Sincerely, Jack the Ripper "and" Trust me, it's love ".

The announcement was given by Michele Masiero during the meeting of Sergio Bonelli Editore last November at the Teatro del Giglio in Lucca: the new label Audace would host a comic book by Joe R. Lansdale.

Deadwood Dick is the nickname of Nat Love, a black cowboy who actually lived in America in the aftermath of the civil war, which became famous for his novelized dime novel style autobiography.
Joe R. Lansdale made it the protagonist of some of his stories and a novel, "Paradise Sky".
Now, starting from the stories "Soldierin '" and "Hide and Horns", and the short novel "Black Hat Jack", the writers and designers of the SBE have drawn a miniseries, of which seven numbers have been announced. 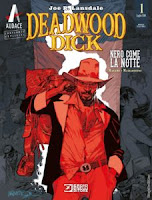 "Black as the night" is the title of the first album, released on July 6 and released by a pair of exceptional authors: Michele Masiero, current Editorial Director of Sergio Bonelli Editore, formerly screenwriter of Dylan Dog and Mister No , and Corrado Mastantuono, one of the most powerful designers in charge of the publishing house. Next month the adventure will continue in the book "Red as blood", always by the same authors, and then, to follow, the baton will pass to Maurizio Colombo and Pasquale Frisenda, then to Mauro Boselli and Stefano Andreucci. The books are 64 pages, in black and white, in the Bonelli increased format, already used for Morgan Lost Dark Novels.

Lansdale is there and it shows. Above all we read, in the dialogues and in the rhythm of history, that the authors have realized by combining the great care and professionalism of the Bonellian tradition with the unmistakable ironic and brilliant style of the writer.
A disenchanted irony, a bit 'sharp, often cynical and sometimes rather gruesome, flowing naturally - often doing as a counter to the drama of events - and is manifested above all in the dialogues, but also in the thoughts of the protagonist. The screenplay by Michele Masiero and the spectacular drawings by Corrado Mastantuono give a brilliant and syncopated rhythm that gives the impression of being on a carousel, one of those from which you would not want to go down. 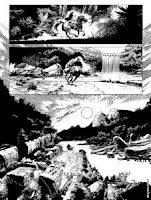 Corrado Mastantuono has long been one of Tex's top designers (on which he debuted in 2007 with the Texone "The Prophet Hualpai") and therefore the west knows him well. An author technically very good and particularly eclectic, always at ease with the most diverse genres and settings. In this book you can appreciate from the first table, for the strong characterization of the characters, for the expressive and powerful foregrounds, for dynamic and cinematographic shots, and for that fascinating chiaroscuro game that always guarantees the right atmosphere without ever compromising the readability of the tables. A wild west a bit 'more twilight than Tex and certainly a bit' dirtier. That west that tells Lansdale in his novels.

Deadwood Dick inaugurates the label Audace, the adult line of Sergio Bonelli Editore that will host the new adventures of Mister No and de Lo Sconosciuto, the Senzanima series by Dragonero and other projects including Loose Dogs, October 10th, K-11, Darwin and Il confine (also a television project). The "explicit contents" that act as subtitles for the Audace brand are, of course, to be framed in the context of the traditional philosophy of Sergio Bonelli Editore. Lansdale is not a writer who fears censorship - if the situation or dialogues require it - especially in the series dedicated to detectives Hap & Leonard, but also in many other novels. In this first book of Deadwood Dick the dialogues can certainly be called explicit, even if, in my opinion, there is nothing particularly audacious. You will see what will happen in the next numbers. To date, still in my opinion, the most audacious series of SBE remains Morgan Lost Dark Novels. 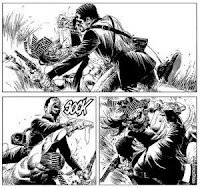 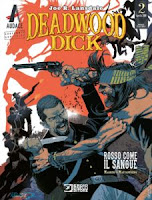