The wild wolfdog isn’t the only thing that gets tamed in “White Fang,” Luxembourgish animator Alexandre Espigares’s ravishingly designed new take on the old Jack London chestnut: London’s hard-bitten survivalist narrative is in for a wholesome cleanup too. Ostensibly more faithful to the novel than Randal Kleiser’s 1991 live-action family adventure — rather than introducing a human protagonist, it wisely stays loyal to London’s predominant mutt’s-eye-view — it nonetheless retains some of that film’s Disneyfied plot adjustments, and tempers certain visceral details to puppydog-cute effect. That’s understandable given the junior target audience, though it’s uncertain whether smaller fry will be sufficiently enraptured by the film’s richly rendered Yukon environment to wait out its stately, staggered storytelling.

Either way, enterprising families can find out for themselves via Netflix, which scooped up Espigares’s film after a warmly received premiere in Sundance’s Kids sidebar. It will likely be most treasured, however, by animation buffs, for its strikingly tactile, oil-painting-textured visual technique. Stepping into features after winning an Oscar for the whimsical 2013 short “Mr. Hublot,” the director asserts himself as a cartoon stylist of impressive ingenuity and finesse, invaluably abetted by art director Stéphane Gallard. That said, his affinity for the material, adapted in workaday fashion by a trio of Francophone writers, isn’t always palpable in this case.

In what might be a confusing gambit for younger viewers, this “White Fang” opens with a flash-forward to the rough midpoint of the narrative, introducing the eponymous beast at his lowest ebb, entered in a dog-fighting match by abusive Fort Yukon lowlife Beauty Smith (voiced by Paul Giamatti). He’s rescued from the fray by the imposing Weedon Scott (Nick Offerman) — not the wealthy gold hunter of London’s novel but an upstanding lawman, in a moral tweak typical of the film’s sanitized approach — before proceedings rewind to White Fang’s early years in the wild.

The ensuing half-hour of mostly dialogue-free visual storytelling, as the newborn pup learns the way of the wilderness from his protective mother Kiche, is the film’s most excitingly sustained and artful passage, buoyed by Bruno Coulais’s lively if perhaps over-ornamented score. The pace is considerably more deliberate than that to which viewers raised on U.S. studio animation will be accustomed, though it does arguably honor the episodic origins of its literary source. The rewards here are ones of fine, subtle sensory detail, be it the shimmering visualization of falling snow on a forest floor, the convincing, characterful nature of the animal sound effects, and the grand, graceful design and movement of the wolfdogs themselves — as expressive and adorable as any Disney critter.

Things get a little messier once humans enter the picture — which, one could argue, is a fundamental law of nature, though that doesn’t remedy the stalled momentum as White Fang is taken into human captivity. In a heavily filleted precis of the novel’s middle section, various twists of fate and misfortune buffet him from one master to another: first Grey Beaver (Eddie Spears), a noble Native American patriarch, then Beauty Smith, and finally, the heroic Weedon Scott and his kindly wife Maggie (Rashida Jones, voicing a character devised by the screenwriters, presumably to offer some feminine contrast in a traditionally boysy affair).

Story: Based on the timeless novel by Jack London, White Fang follows the story of a boy who befriends a half breed wolf as he searches for his father, who has mysteriously gone missing during the Gold Rush. 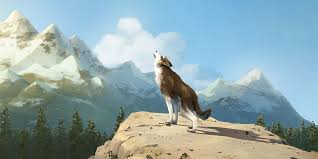