We continue our search for the filming locations for "The Big Gundown". The scene shifts from Corbett lying on the ground being told Little Sarah is not the leaders daughter but his 4th wife to a secluded ranch with two men having a fight while the other ranch hands watch. After Mike is brutally beaten Cuchillo wanders in looking for food. The men tell him they don’t hire Mexicans and to move along. “The Widow’ owner of the ranch appears and tells Cuchillo he can have a job if he’s worthy as Mike will take some time to recover from his beating. After being fed the widow decides to put him to the test and asks the men to suggest something. One of them says they have ‘Old Barney’ out in the corral. They all laugh as well as Cuchillo not knowing what the joke is about.

This scene was filmed at Manzaneras el Real, Spain. Many Euro-westerns have been filmed in this valley including “The Good, the Bad and the Ugly”, “Minnesota Clay”, “Ringo and His Golden Pistol” and “The Hills Run Red” to name a few. 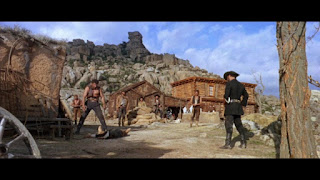