Who Are Those Guys? – Memmo Carotenuto 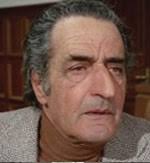 Guglielmo Carotenuto was born in Rome, Lazio, Italy on July 24, 1908. The brother of Mario Carotenuto [1915-1995], both sons of Nello Carotenuto (Raffaele Carotenuto) [1876-1937], in turn a well-known theatrical actor, and Corinna Santarnecchi, made his debut in the theater as a child in the Roman dialect company of which his father Nello was part, and entered the cinema in technical roles, interpreting meanwhile his first small roles, and in 1935 in Vecchia Guard by Alessandro Blasetti.  His film activity continued during World War II.

His first important role comes only with the interpretation of a patient in a hospital of “Umberto D.” (1952), in which Vittorio De Sica gives him the opportunity to show off his dramatic talent that is perfected over the years in roles of the populous capital of expressive blood and with great heart. In 1956 his interpretation of Quirino, Marcus Mastroianni's comrade in the film “The Bigamo” by Luciano Emmer, earned him a Silver Ribbon award.

With a characteristic rough voice and the irrepressible typical Roman irony, the plebeian but sincere ways, from the fifties appears in over a hundred films often with masters of Italian comedy, such as Totò, Alberto Sordi, Peppino De Filippo, the aforementioned Vittorio De Sica and Gina Lollobrigida.

Worthy of note is his part in “The Unusual Unknowns” by Mario Monicelli (1958), in which he interprets the part of the convict Cosimo, to whom Peppe er Pantera (Vittorio Gassman) blows the plan of the fateful blow to the Monte di Pietà that ends in pasta and chickpeas. In “Poveri ma belli” (1956) and “Belle ma povere” ( 1957 ), both by Dino Risi, is the roommate tram driver of Renato Salvatori, in “Fathers and Sons” of Mario Monicelli (1957), is instead a loving but choleric father with a large number of offspring;  finally, in “Pane, amore e fantasia” (1953) and “Pane, amore e jealoia” (1954), both by Luigi Comencini, he has the part of the Baiocchi a carabiniere for De Sica.

In the seventies his film appearances become less and less, participating in the cast of several films with Franco Franchi and Ciccio Ingrassia and with Enrico Montesano.

A few months before his death he made his last film, directed by Salvatore Samperi: “Amore in primo classe” (1980 ).